The Psychology of Excuses: Just a bad habit in disguise 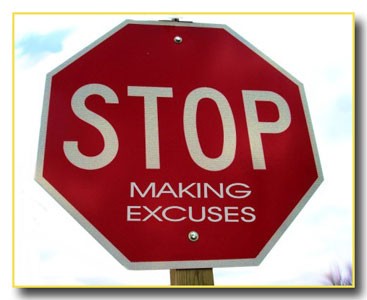 Excuses are just bad habits in disguise.  They're there all the time, just waiting for an opportunity to show themselves.

Over the past few months, I've battled my fair share of personal excuses as it relates to training and injuries.  I've battled with patella tendonitis in my right knee and it has caused me much grief.  My training has suffered due to this and at times I find that the mental roadblocks I put up are far worse than the injury themselves.

I was getting comfortable with using my excuses as a reason to “not train” when I know perfectly well I can change my workouts to accommodate my injury. 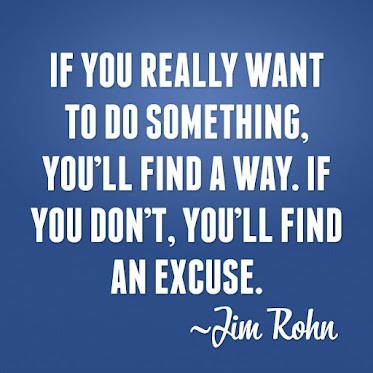 Do you ever find you have excuses like this in your life?  Funny how they seem to just come naturally at times.

Below are some interesting quotes on excuses that I've managed to curate from the web. It definitely makes you think.

I recently read the following exert describing the psychology of excuses:

“Excuses are a common psychological method of shifting blame and keeping the self-image intact when faced with negative feedback. There are strong emotional pressures that motivate our excuse making. Responsibility and positive self-esteem are key in reducing the need for excuses in our psychology.”

“I refuse to let excuses in.  Recognize them for what they are and move on… don't be a victim!”

“He that is good for making excuses is seldom good for anything else.” ~ Benjamin Franklin

“People spend too much time finding other people to blame, too much energy finding excuses for not being what they are capable of being, and not enough energy putting themselves on the line, growing out of the past, and getting on with their lives.”  ~ J. Michael Straczynski

“The real man is one who always finds excuses for others, but never excuses himself.” ~ Henry Ward Beecher

“Excuses change nothing, but make everyone feel better.” ~ Mason Cooley

“Ninety-nine percent of the failures come from people who have the habit of making excuses.”  ~ George Washington Carver

“Bad excuses are worse than none.” ~ Thomas Fuller

“It is wise to direct your anger towards problems – not people; to focus your energies on answers – not excuses.” ~ William Arthur Ward

“I do not believe in excuses. I believe in hard work as the prime solvent of life's problems.” ~ James Cash Penney

“Not managing your time and making excuses are two bad habits. Don't put them both together by claiming you “don't have the time”. ~ Bo Bennett

“Several excuses are always less convincing than one.” ~ Aldous Huxley 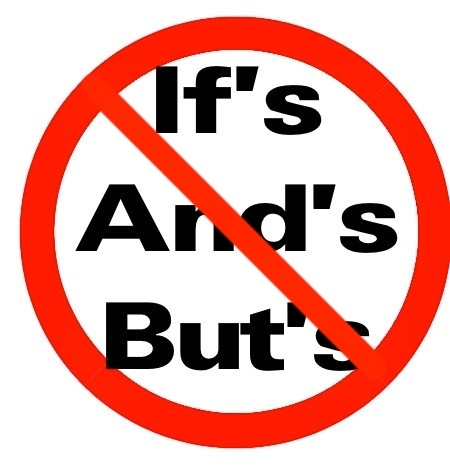 “If you really want to do it, you do it. There are no excuses.” ~ Bruce Nauman

“I am not the kind of woman who excuses her mistakes while reminding us of what used to be.” ~ Gene Tierney

“And I have this little litany of things they can do. And the first one, of course, is to write – every day, no excuses. It's so easy to make excuses. Even professional writers have days when they'd rather clean the toilet than do the writing.” ~ Octavia Butler

“We need to hear the excuses men make to themselves for their worthlessness.” ~ Margaret Fuller

“It happens to the best of them. You lay off singing and your throat gets out of practice. No excuses. I blew it.” ~ Bobby Darin

“People want a cop-out, listen I'm a realist and I talk about motivation, talk about all the things it takes to be greater or are important to winning and people want to use excuses all the time.” ~ Mike Ditka

“I had made a decision early on that we were going to do the right things and that if they worked we were going to be very successful. And if for some reason they didn't, all the claims and the protestations and the excuses wouldn't make any difference.” ~ John Engler

“Some of my high school teachers did remind me that I had an excellent imagination when it came to making up excuses.” ~ David E. Kelley

“Ignorance of the law excuses no man from practicing it.” ~ Addison Mizner

“As soon as I step on the court I just try to play tennis and don't find excuses. You know, I just lost because I lost, not because my arm was sore.” ~ Goran Ivanisevic

“The best job goes to the person who can get it done without passing the buck or coming back with excuses.” ~ G. M. Trevelyan “Don't make excuses and Don't talk about it. Do it.” ~ Melvyn Douglas

“I'm not going to make any excuses. I just went out and stunk it up tonight.” ~ David Wells

“I'm not making any excuses. I got my butt kicked in certain games.” ~ David Wells

“Regardless of the difficulties we may face individually, in our families, in our communities, and in our nation, the old adage is still true – you can make excuses or you can make progress, but you cannot make both! The America I know doesn't make excuses.” ~ Mia Love

“Nothing is impossible; there are ways that lead to everything, and if we had sufficient will we should always have sufficient means. It is often merely for an excuse that we say things are impossible.” ~ Francois de la Rochefoucauld

“Excuses change nothing, but make everyone feel better.” ~ Mason Cooley