5 TEDx Videos sure to inspire, motivate and supercharge your day 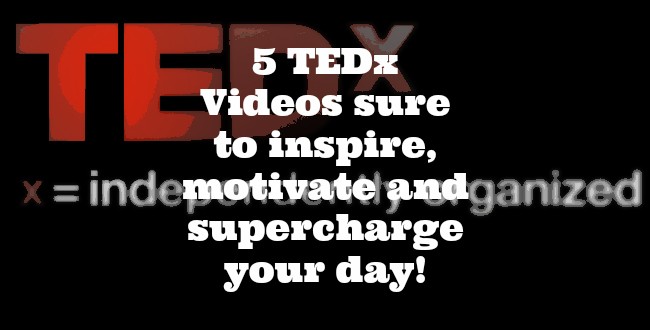 I often find myself looking at my clock in awe as I wonder where the last hour of my life has gone after being drawn into yet another inspiring TED talk. I could spend hour after hour scouring the seemingly endless library of videos, focusing on every topic imaginable. There's something for everyone! (you've now been warned! #TIMETRAP alert!)

so now, get ready to for…

5 TEDx Videos that will leave you feeling inspired, motivated and ready to conquer whatever life has to throw at you!

[toggle title=”About the video: Secrets of Success in 8 words” state=”close” ]Why do people succeed? Is it because they're smart? Or are they just lucky? Neither. Analyst Richard St. John condenses years of interviews into a unmissable 3-minute slide show on the real secrets of success.

A self-described average guy who found success doing what he loved, Richard St. John spent more than a decade researching the lessons of success — and distilling them into 8 words, 3 minutes and one successful book.[/toggle]

[toggle title=”About the video: The surprising science of happiness” state=”close” ]Dan Gilbert, author of “Stumbling on Happiness,” challenges the idea that we’ll be miserable if we don’t get what we want. Our “psychological immune system” lets us feel truly happy even when things don’t go as planned.

Harvard psychologist Dan Gilbert says our beliefs about what will make us happy are often wrong — a premise he supports with intriguing research, and explains in his accessible and unexpectedly funny book, Stumbling on Happiness.[/toggle]

[toggle title=”About the video: Steve Jobs 2005 Stanford Commencement Address” state=”close” ]At his Stanford University commencement speech, Steve Jobs, CEO and co-founder of Apple and Pixar, urges us to pursue our dreams and see the opportunities in life's setbacks — including death itself.

As CEO of Apple, Steve Jobs spearheaded a few of the most iconic products in technology, entertainment and design.[/toggle]

[toggle title=”About the video: How Great Leaders Inspire Action” state=”close” ]Simon Sinek has a simple but powerful model for inspirational leadership all starting with a golden circle and the question “Why?” His examples include Apple, Martin Luther King, and the Wright brothers … (Filmed at TEDxPugetSound.)

In 2009, Simon Sinek released the book “Start With Why” — a synopsis of the theory he has begun using to teach others how to become effective leaders and inspire change.[/toggle]

[toggle title=”About the video: Gratitude” state=”close” ]Nature's beauty can be easily missed — but not through Louie Schwartzberg's lens. His stunning time-lapse photography, accompanied by powerful words from Benedictine monk Brother David Steindl-Rast, serves as a meditation on being grateful for every day. (Filmed at TEDxSF.)

Learn more about Louie and Moving Art at www.movingart.com