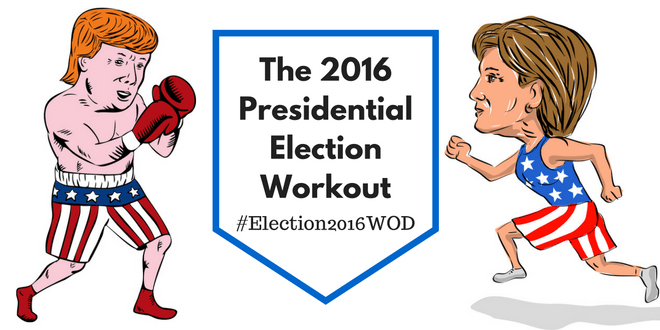 Tensions are running high as the world tunes their attention to the spectacular spectacle known as the 2016 Presidential Election.

It's easily the most talked about, debated, ‘commented' and ‘shared' election in history. Facebook alone has said that over 5.3 billion posts, likes, comments and shares have occurred between January to October 2016. People are unfriending each other left, right and center and some of the feeds I've been witness to, I don't blame them. It's stressful so let's look to exercise and moving our body with a purpose to help us with dealing with this historical event.

Exercise and Stress: Get moving to manage stress

Exercise increases your overall health and your sense of well-being, which puts more pep in your step every day. But exercise also has some direct stress-busting benefits. It pumps up your endorphins. Physical activity helps bump up the production of your brain's feel-good neurotransmitters, called endorphins. – Mayo Clinic

If you find yourself tuning in to watch the battle wage on between democratic presidential candidate, Hillary Clinton, and her republican rival Donald Trump, I propose a simple and fun way to deal with the stress of it all.

If you find yourself watching the election, and want to offset some of the stress induced rhetoric and debates, this is for you. Whenever any of the following happenings occur, do the corresponding movement with suggested reps.

I realize this may not alleviate all the stress created by this year's political, but it will help a little bit. I wish I could have included other words, phrases and the like, but based on scouring the internet, media outlets, and gossip sites, this appears to be what everyone is still talking about…

After all, how many burpees do you really think one could do during election day?