6 Reasons for Why Yogis Should Not Smoke Cannabis 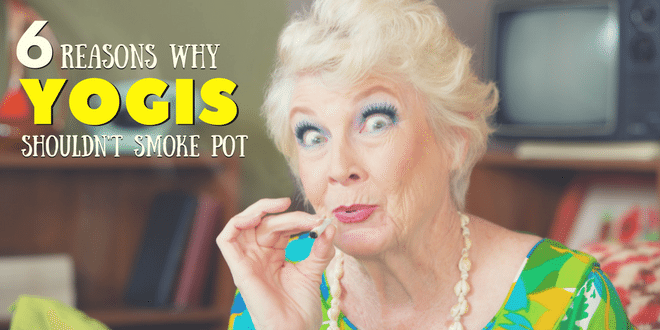 India and cannabis have a very long and storied history, but should practitioners of yoga consume it? There are arguments for both sides rooted in yogic tradition. The recent legalization of recreational consumption in the U.S. has created an interest in combining popular Western yoga styles and cannabis. Some studios have opened up with this combination as their core draw. 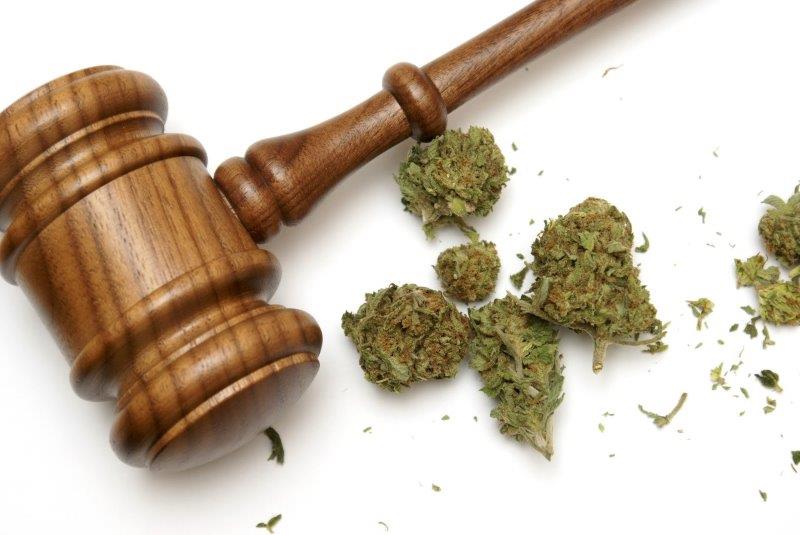 But is it safe to do this physically and spiritually? Let’s take a look at the historical use of cannabis in the yogic tradition first to get a full picture before we get into reasons why it’s not a good idea because, in some yogic traditions, it is used as an aid in their practice.

Bhang is a cannabis drink much like the mango lassi you may have had in an Indian restaurant. It is the basic word for cannabis. Ganja is smoked cannabis. Jamaica may have popularized that term, but it comes from India. Both forms are used by devotees of Shiva, the Hindu god of destruction. Shiva is also the originator of yoga and he consumes a lot of bhang and ganja.

The mythological reason goes back to a hugely important myth in Hinduism called the “churning of the ocean of milk”. In this myth, the gods and the demons cooperated in this churning to create the elixir of immortality. During this churning process, many things emerged from the ocean. One of them was a horrible poison that threatened to kill all involved. Shiva swallowed this poison and held it in his throat, which turned him blue. It also raised his body temperature so much that Shiva could have burned everything up. 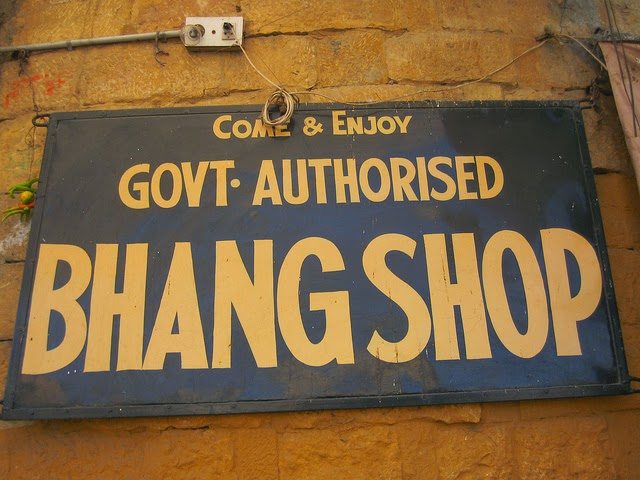 Photo Credit: Bhang : Entheogenic Use of Cannabis in India

To control this temperature, three things happened. First, the river Ganges fell from heaven into his hair to cool his head off. Second, he set up his home in the cold Himalayas. Third, he consumed bhang.

So, first, bhang was considered a medicine and a very potent one at that. There is no textual evidence that says that Shiva consumed cannabis as a form of recreation. Indeed, while Ayurveda (traditional Indian medicine) does consider cannabis as a medicinal product, the texts recommend against over-consumption.

But you wouldn’t know that from Shiva’s followers.

Holi is the festival of the Indian new year. You might know it as the color festival where people throw colored powder everywhere in a riotous celebration. It is also the time where cannabis consumption is the highest, along with other religious festivals devoted to Shiva like Shivaratri. North India and the city of Varanasi are the core areas where this tradition is practiced. Bhang is consumed in great quantities during this time because it aligns them closer to Shiva’s state as a deity.

Sadhus (Hindu renunciates) dedicated to Shiva go to great lengths to embody the god, going so far as to live naked, smear themselves with ash, and drink and smoke large amounts of cannabis. To them, cannabis is considered a sacrament. Shiva is also the lord of all intoxicants and poisons. In fact, datura, a very dangerous herb also used (rarely) in ayurveda is also sacred to Shiva. 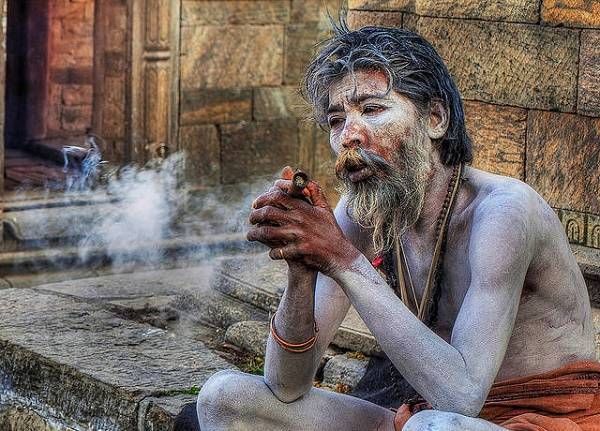 This practice of identifying completely with Shiva (or any other deity) is the core of the idea behind Tantra, a particular stream of yogic philosophy. Yoga has a history of at least 5,000 years and has spawned many interpretations and practices. Tantra in India is practiced only under the guidance of a guru who can teach the student how to use intoxicants and other substances and practices seen as impure or negative by the wider Hindu religion as a road to losing the ego through identification with the deity. Western preoccupation with Tantra as a sexual practice is a myopic focus on just one small part of a much wider tradition, and not all Tantric gurus even use sex, or cannabis, as a tool for their devotees.

Of course, we can’t say that every consumer of bhang during Hindu holidays is doing it strictly for religious purposes. Bhang is available throughout the year in India despite cannabis being technically illegal due to this long history of religious use. Recreational use of the drug is popular.

Arguments against cannabis from the yogic tradition

Raja yoga is the core form of yoga that Western yogic traditions sprung from and it places a heavy emphasis on sattvic practices, especially mental ones. Most yogic traditions place a high emphasis on purity and the attainment of a sattvic state. Sattva is one of the three qualities that substances and practices are divided into. It is the bright and cool state that balances rajas (heat and motion) and tamas (darkness and heaviness). The divine transcends these qualities, but it is only through becoming sufficiently pure that the divine can be experienced. Cannabis is considered to be tamasic. Incidentally, Shiva is also seen as the lord of the tamasic quality. 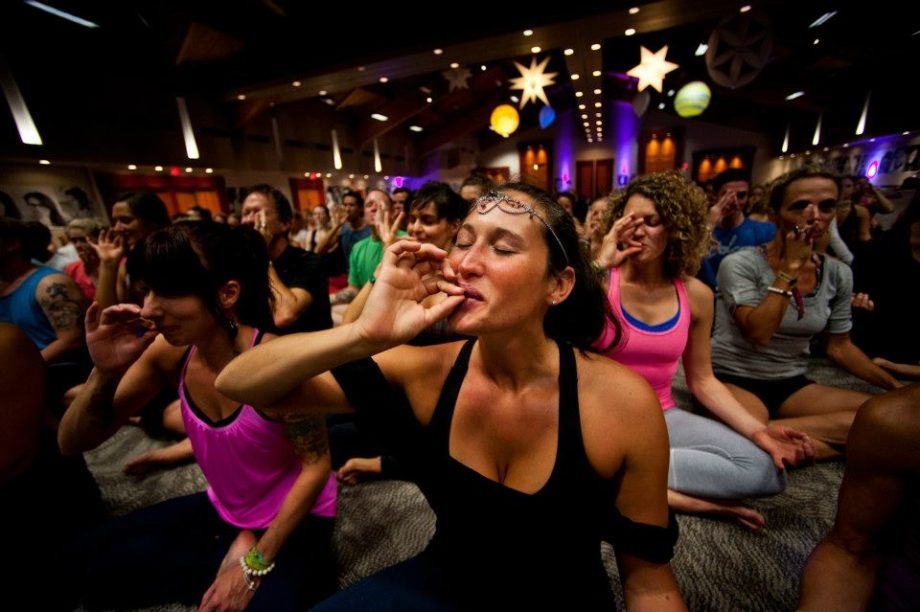 The mind has to be cool, bright, and calm to achieve freedom in Raja yoga. Yet even in its core text, the Yoga Sutras, there is a mention that “herbs” are a route to certain mental states of freedom and psychic ability. However, this is the only place in the text where this is mentioned. Proper meditation, stillness, and moral purity are considered the better route. The partaking of cannabis isn’t considered necessary or even useful.

For most western practitioners of Yoga, attaining liberation or unification with a deity aren’t the reason why they go do practice at the gym three times a week. The religious aspects of yoga aren’t an interest and may even be actively resisted. The average western yogi wants to improve their health and calm their minds a bit. Even those who also practice yogic meditation along with their asana practice aren’t likely to have liberation on their minds. Here then are six reasons why yogis shouldn’t use cannabis as an aid to their practice.

6 Reasons for Why Yogis Should Not Smoke Cannabis 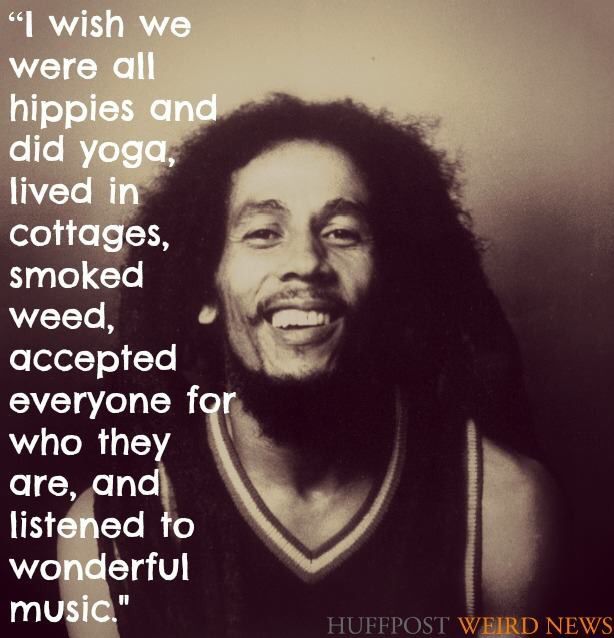 Michael is a marketing and creative content specialist at GotVape.com with primary focus on customer satisfaction. Technology and fitness combined healthy lifestyle obsession are his main talking points.