These 10 TED Talks To Get You Thinking About Mental Health 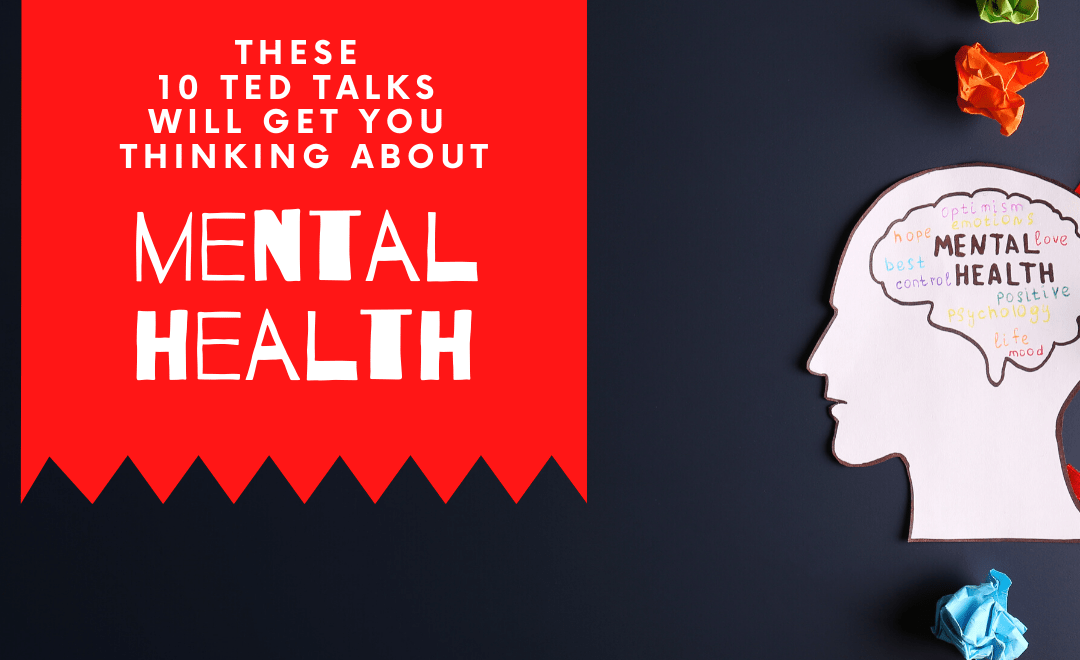 TED talks are always a good resource for getting inspired, and on the subject of mental health, it can be especially beneficial to expose yourself to a wide variety of personal and professional accounts. Mental health is a topic rife with taboo, prejudice, and stereotypes, and this list of TED talks will bust open your assumptions about mental health.

Amongst these powerful TED talks, you’ll discover difficult subjects such as depression, schizophrenia, and suicide being handled with compassion and tact.

The talks feature a range of perspectives from neuroscientists and psychologists to comedians; from those who study mental illness to those who suffer from it – and occasionally both!

Dig into these lectures for a deeper understanding of your own brain and for new and better ways to be compassionate to those around you.

David Anderson is rethinking the brain. Describing the traditional view of the brain as “a big bag of chemical soup”, in this powerful TED talk Anderson explains how his research is giving him and his colleagues a new view about the structure of the brain and the role of the brain chemicals in mental illness.

Anderson argues that by pinpointing the location of the release of these chemicals we can develop new and highly specific treatments for an array of mental illnesses from depression to schizophrenia. With charisma and charm, he explains how he’s using a bunch of fruit flies to help him do so! Let Anderson take you on a journey through his research and in doing so you may end up understanding your own brain a little better.

Sangu Delle begins his emotional TED talk from a place of personal experience. As he faced up to his own anxiety and depression, Delle was forced to tackle his own assumptions and prejudices about men and mental health. In this piece Delle allows us to join him on the journey he underwent – from toxic masculinity to emotional maturity.

Subtly unpicking the intersection of race and gender as barriers to pursuing mental health treatment, Delle is on a mission to undermine the stigma of mental health. As Delle emphasizes in his personal account anyone can suffer from poor mental health. Becoming comfortable talking about your emotions is an important first step for anyone to take in pursuing help.

3) Why We Choose Suicide From Mark Henick

Like Sangu Delle, Henick begins his TED talk with a moving personal account of his own experiences, this time not just with depression but with thoughts of suicide. The topic itself is one surrounded by profound taboo, and the value of Henick’s open account is partially in demystifying something that’s hard to talk about, but utterly crucial that we learn to do so.

Henick’s dual perspective as both a patient and a professional provides him with a powerful platform from which to speak. Watching this video you’ll be struck by his sensitive understanding of the way a suicidal person comes to their decision, as well as learning ways to entirely reframe suicide to help those afflicted by its lure.

4) The Bridge Between Suicide And Life From Kevin Briggs

California highway patrolman Kevin Briggs’s 23-year career qualified him to talk about suicide in a most peculiar way. As guardian of San Francisco’s Golden Gate Bridge for many of those years, Briggs was intimately involved with many people seeking suicide from its heights. His difficult but rewarding role as guardian of the bridge, and his close contact with many people at a time of crisis, gives him a unique and compassionate perspective on suicide.

Following Henick, Briggs is working in his own way to undermine the suicide taboo. His TED talk is brimming with practical advice for anyone dealing with a loved one who may be considering suicide. Watching this TED talk might even enable you to save a life.

5) How To Start A Conversation About Suicide From Jeremy Forbes

Jeremy Forbes’s charity HALT (Hope Assistance Local Tradies) works to support tradespeople – in Australia, overwhelmingly men – to access mental health support in their local communities. Touching on the complex issues of gender and mental health introduced by Delle, Forbes’s TED talk continues in the spirit of Henick in teaching us ways to support those around us struggling with suicidal thoughts.

Forbes’s work with tradespeople has made him a master of overcoming barriers to discussing mental health with the recalcitrant men in his community and his nuanced TED talk will provide you with essential tools for helping those around you.

6) Confessions Of A Depressed Comic From Kevin Breel

Kevin Breel’s intimate TED talk describes his struggles with depression and powerfully connects his feeling of “living two different lives” with a broad misunderstanding of how depression operates in functional and seemingly successful individuals. His emotional and intensely personal account will be at once encouraging for anyone who has experienced first-hand the deadly might of depression, as well as offering important tools for discussing it with loved ones.

By offering an atypical image of a sufferer of ill mental health – a functional, funny, and successful person – Breel undermines our biases around depression and creates the important space for beginning to battle against it.

7) Mental Health For All By Involving All From Vikram Patel

Patel begins with the shocking statistic that in developing countries, close to 90% of people suffering from mental illness go untreated (in wealthy nations it’s a still shocking 50%). Expanding the conversation about mental health from a Western perspective to a global one, Patel has developed a new approach to mental health services that can expand into the developing world.

Patel’s community-based approach to mental health treatment empowers ordinary people without years of training to intervene in mental health crises. This appeal to the compassion and care possessed by all people around the world has the power to greatly expand our ability to support those suffering from mental illness.

8) What’s So Funny About Mental Illness? From Ruby Wax

Diagnosed with clinical depression over a decade ago, comedian Ruby Wax has experienced first-hand the subject of her moving TED talk – the doubly cruel affliction of mental illness and societal discrimination that can follow it.

Wax’s personal and practical advice will help anyone suffering from mental illness to deal with the stigma that often accompanies it. As a walking counterexample to society’s stereotype of the mentally ill, Ruby Wax discusses a difficult subject with immense energy and humor in this TED talk.

9) The Voices In My Head From Eleanor Longdon

Eleanor Longdon’s experience with schizophrenia provided her with an up-close look at the ugly, failing system of mental health support in the UK. Describing her journey, which began with the sound of an innocuous narrative voice in her head, to hospitalization and then the long struggle back to mental health, Longdon offers a powerful account of living with schizophrenia.

Now a professional psychologist, Longdon makes the compelling and surprising case that her survival hinged on listening to those voices in her head. This TED talk undermines simplistic narratives about mental illness and conceptualizes her schizophrenia as a meaningful response to her traumatic childhood. Valuable for its personal and professional perspective, Longdon is likely to get you looking differently at mental illness.

10) Toward A New Understanding Of Mental Health From Thomas Insel

Thomas Insel begins with the analogy to physical health – through early detection, deaths from heart disease have been reduced by 63%. He asks: could we do the same thing with deaths associated with schizophrenia and depression? Insel believes that early detection of mental illness is possible through structural changes to our health care service and that it has the power to profoundly affect the outcomes of these illnesses.

Insel wants to reconceptualize mental health as stemming from “brain disorders” and this shift to an emphasis on the physical state of the brain will create the conditions for the early detection he advocates. His powerful thesis is based on research that in mental health, the behavior is the last thing to change – in Alzheimer’s, for example, the brain has been undergoing changes for a decade or more before it starts to affect behavior. Understanding mental illness as not manifested through behavior but through changes in the brain could be the key to timely and responsive treatment.

Research has shown that in the USA almost half of the adults will experience mental illness at some point in their lifetime, and yet as a society, we still struggle to talk about and understand mental health. The first step towards ending the stigma associated with much of mental illness begins with education and awareness. Engaging with this list of TED talks is sure to provide you with the tools to understand your own psychological impulses as well as support those you care about in their own struggles.

How common is it?

What is the economic cost?

How does it impact youth?